Scatter plots, best fit lines (and regression to the mean)


Last week I came across an interesting conversation on twitter, which raised something I hadn’t thought about before:

Something I embarrassingly never thought about visually until reading @yudapearl 's #bookofwhy. People tend to overestimate correlations because people don't think about regressions using least-squares, they think about them as orthogonal regression. #DataScience #dataviz pic.twitter.com/791MR33CtJ

There were a number of good responses, including links to a few blog posts digging into how all this works, but I wanted to try and summarise what I think are the most important points and have a go at putting together my own versions of the visualisations.

In short, if I have a scatter plot of some data, there are at least three different ways to put a line of best fit through the data - 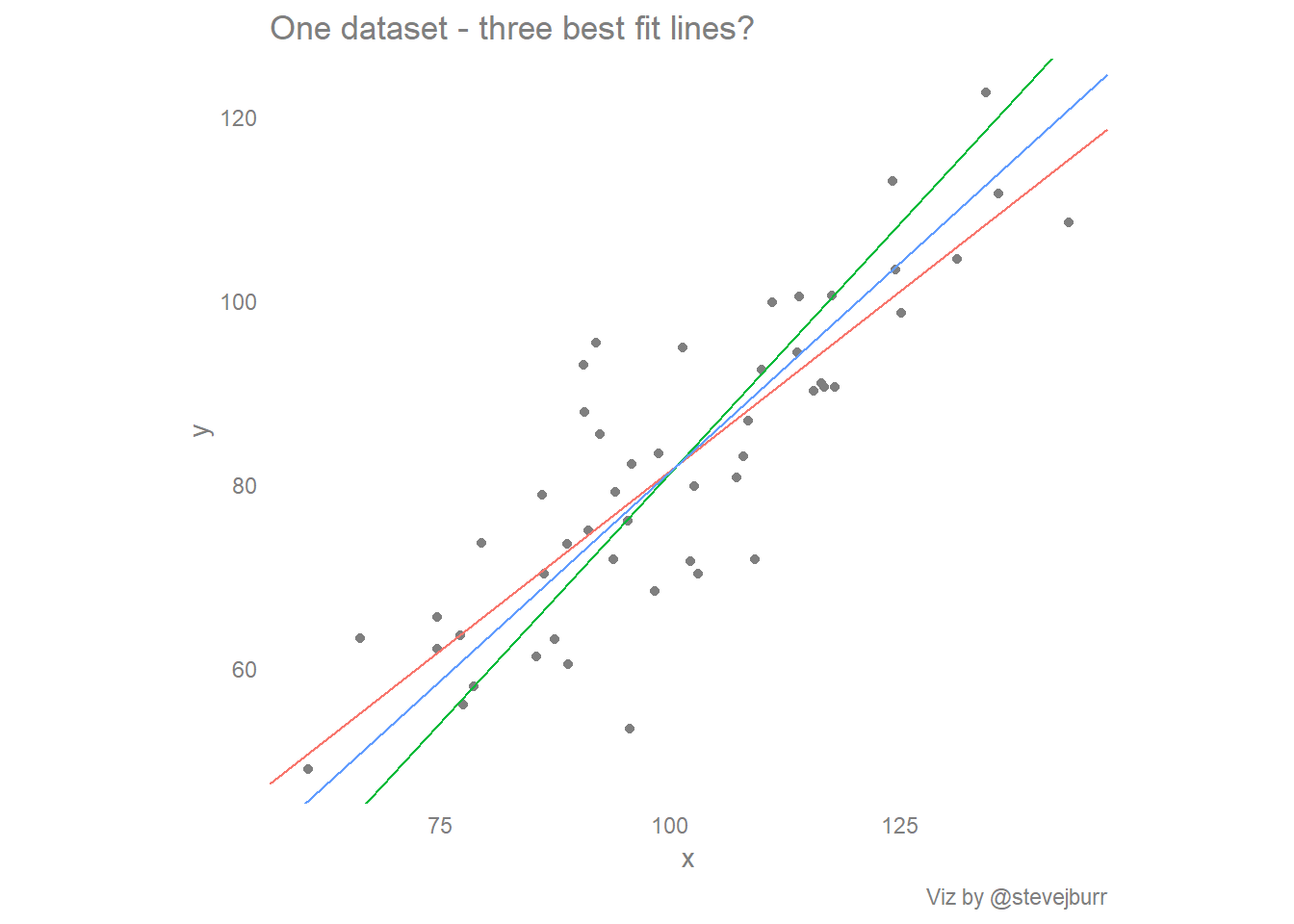 This post explores the how, why and interpretation of these three lines and at the end offers some thoughts on what this means for the creation of data visualisations and for doing exploratory data analysis using visualisations as a key tool.

We’re going to need some simulated data to plot, so let’s simulate some using R:

This data has a true underlying deterministic relationship between x and y, and then I have added some random noise to these data so that all the points don’t lie on a straight line.

We can easily plot these data using ggplot2: 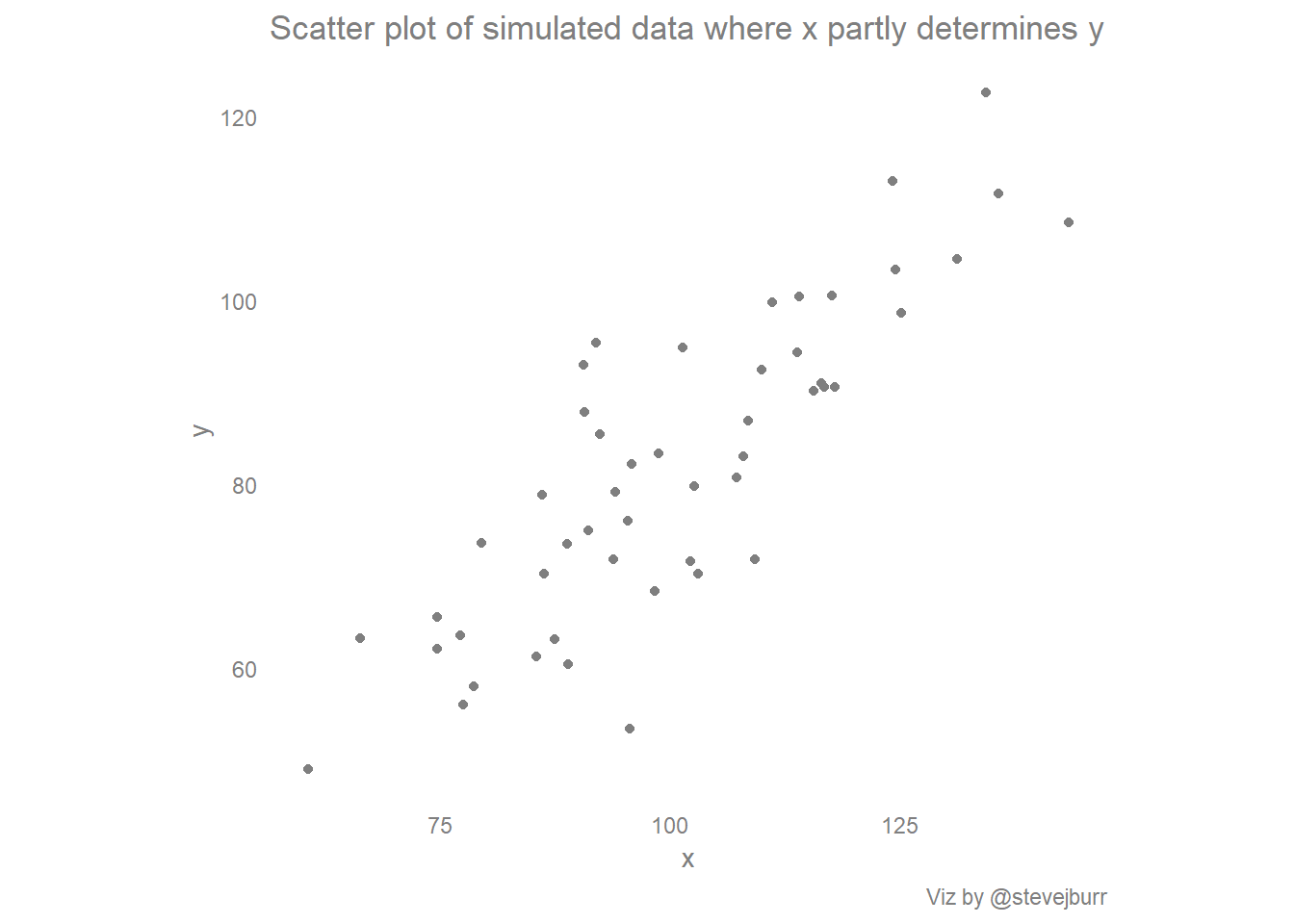 Let’s start with the standard “best fit” line, the regression line which predicts y from x: 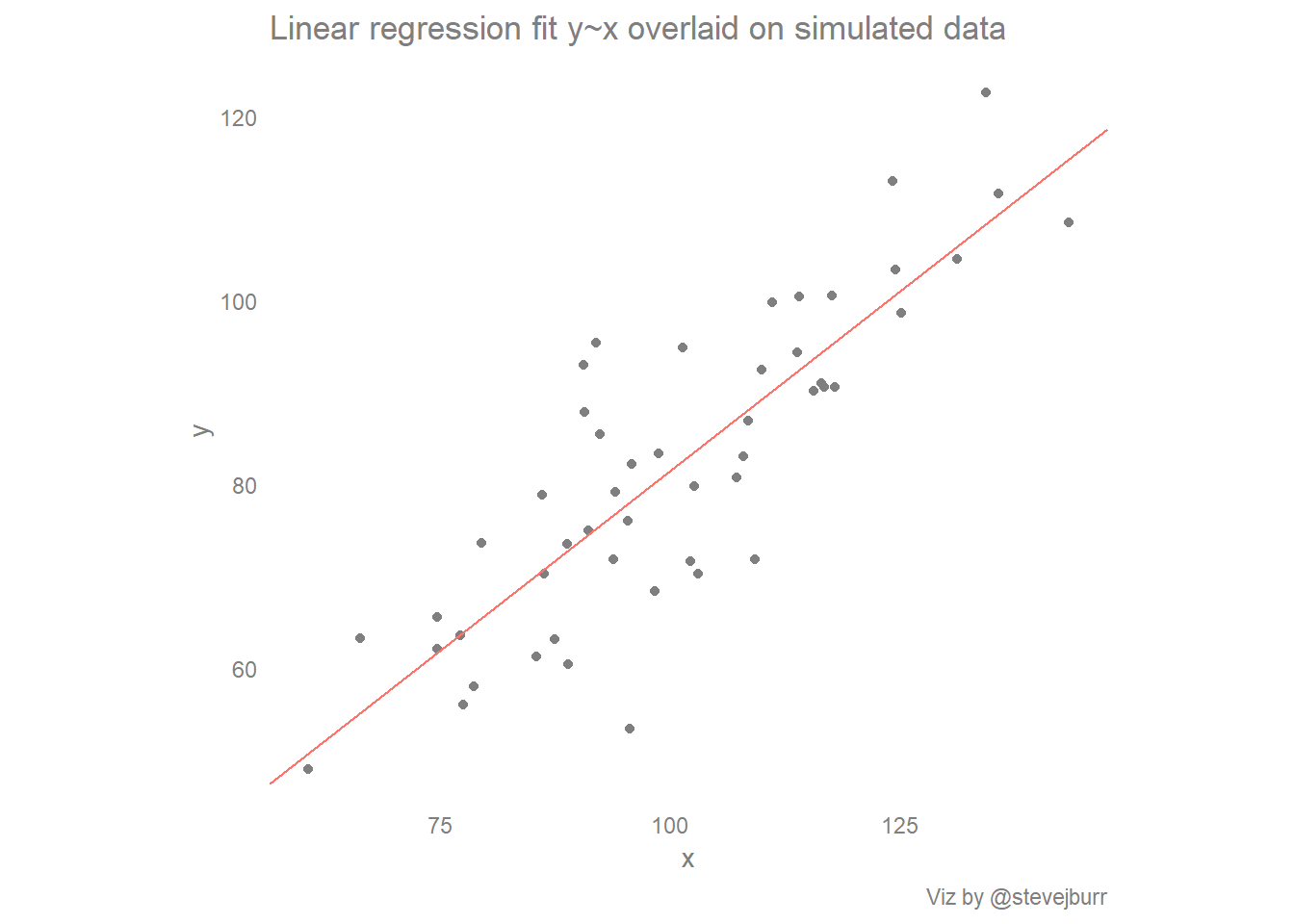 What is the standard regression line doing?

When you perform a standard linear regression analysis and predict a variable y from another variable x, you are making some assumptions about the relationship between the two variables which you might forget about in the context of best fit lines.

The linear model being fit by the regression analysis can be expressed as:

The key assumption here is that there is a simple linear relationship between x and y, whereby each unit increase in x results in a corresponding increase of B in y. Any variation in the data not captured by this relationship is assumed to be the result of random variation. Within most regression analyses this error is assumed to be normally distributed with mean 0 and constant variance across all the values of x (i.e. we predict the data equally well at any point on the line).

A real example of this comes from the work of Francis Galton which helped to give regression analysis its name. Galton studied the relationship between the heights of parents and their children. He noted that though taller parents have taller children, those children are less exceptionally tall than their parents. That is, heights “regress to the mean”. 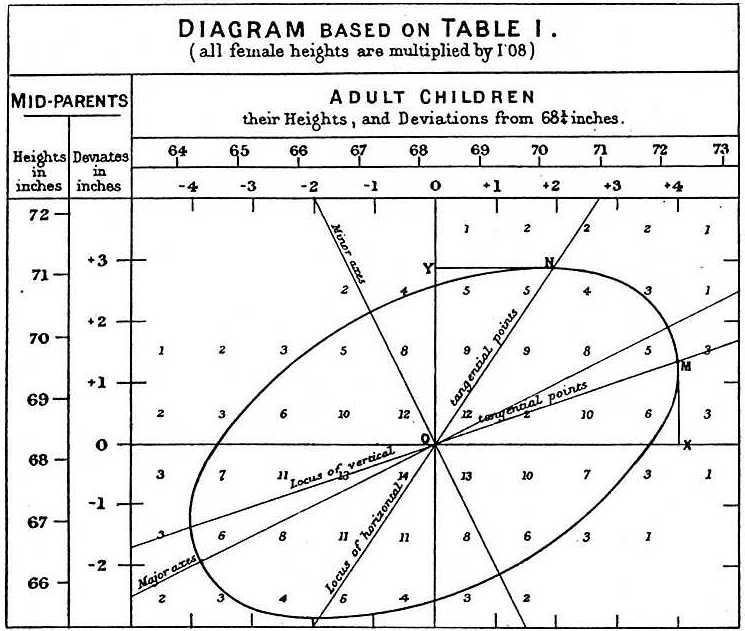 This comes down to the random part of the model which isn’t captured by the coefficients. When someone is exceptionally tall, the model says that this is partly due to underlying factors we can measure (e.g. genetics - approximated by parent height) but also partly driven by random chance. In other words, a very tall parent may pass on the genetic traits for being tall but not the specific combination of other random factors which led to their exceptional height - luck is not inherited!

Effects like this can be seen in all sorts of fields, for example sports (see the “Sports Illustrated Cover Curse”), company performance and performance of fund managers. When you measure over time, you tend to see that the best performers in one time period tend to do worse in subsequent periods (and vice versa, the worst performers will tend to do better than next year). One aspect of their performance is down to underlying skills / fundamentals but what makes them exceptional in one year is the extra element of good or bad luck.

These examples help to give some real world intuition to this concept (and help you reason about the future from what you’ve observed in the past) but we can look at this in more abstract terms. This is well explained in Gelman/Hill’s regression analysis book, and I’ve tried to illustrate their example in the next visualisation.

The code to do this is a little bit longer than the previous plots, but most of it deals with standardisation of the variables. This means that we subtract the mean of each variable from each observation of that variable, so the values are centered about 0, which now represents the average value. We also divide each value by the standard deviation, meaning each value shows how many standard deviations away from the mean each observation is. As the data is simulated from a normal distribution, nearly all of the values will lie between -3/+3, with the vast majority between -2/+2. 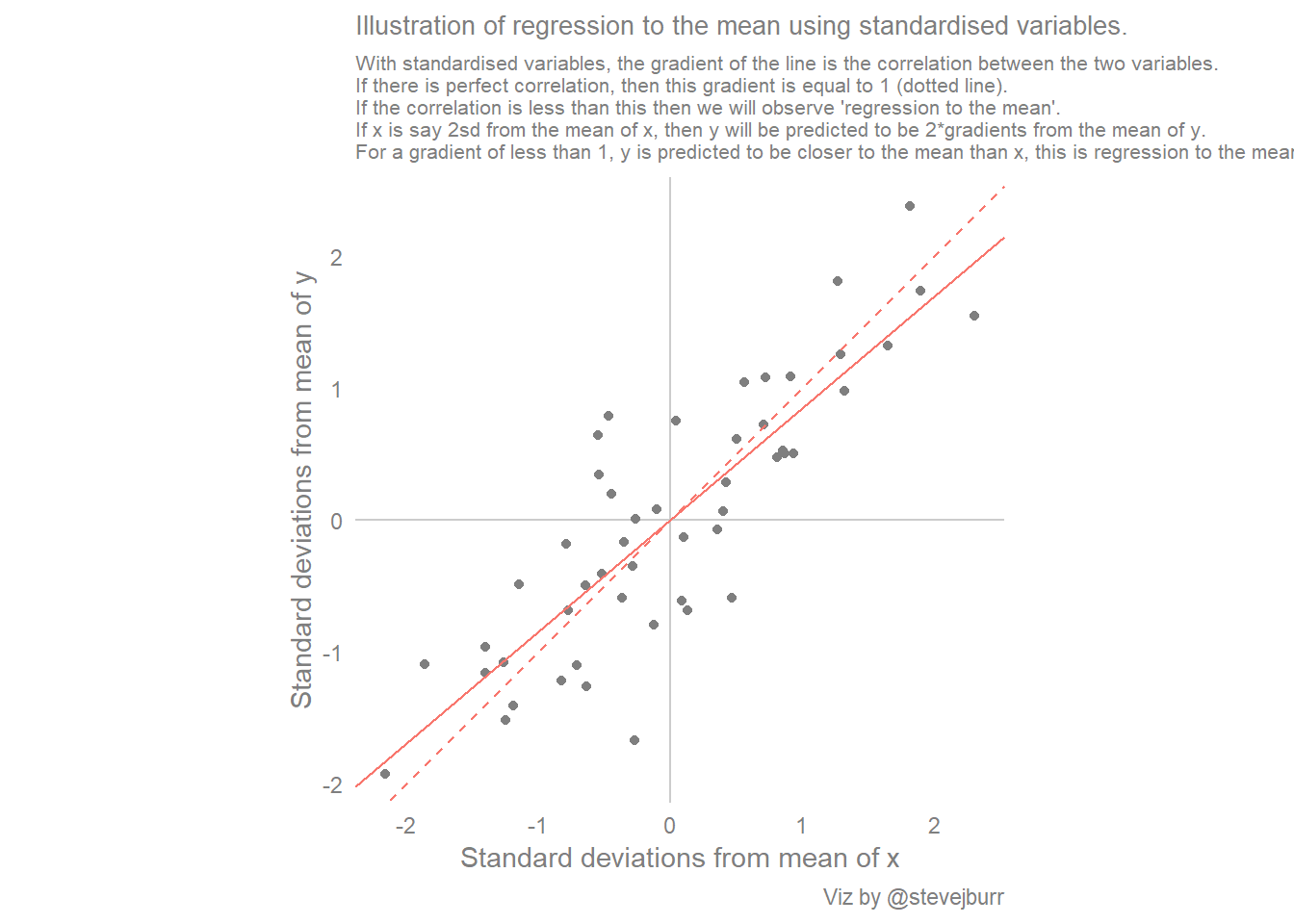 Another, final, way of thinking about this is that linear regression is estimating the mean value of y conditional on the value of x. In other words, if we have a lot of data for a given problem, and we want to predict a new value y based on a fixed value of x, then the best thing to do is predict the new y value to be the average of all the data points with the same value of x. In most real cases, we won’t have enough data to just consider x values with the same value as what we want to predict, so the regression analysis allows us to make use of all the data we have across all the values of x to make a prediction at specified value of x.

We can satisfy ourselves that the linear regression line represents the average value of y given a value of x by doing some summarisation. If we split x into five approximately equal chunks, calculate the average value of y within each of these chunks and then add these averages to the scatter plot we see that the linear regression line comes very close to these conditional means: 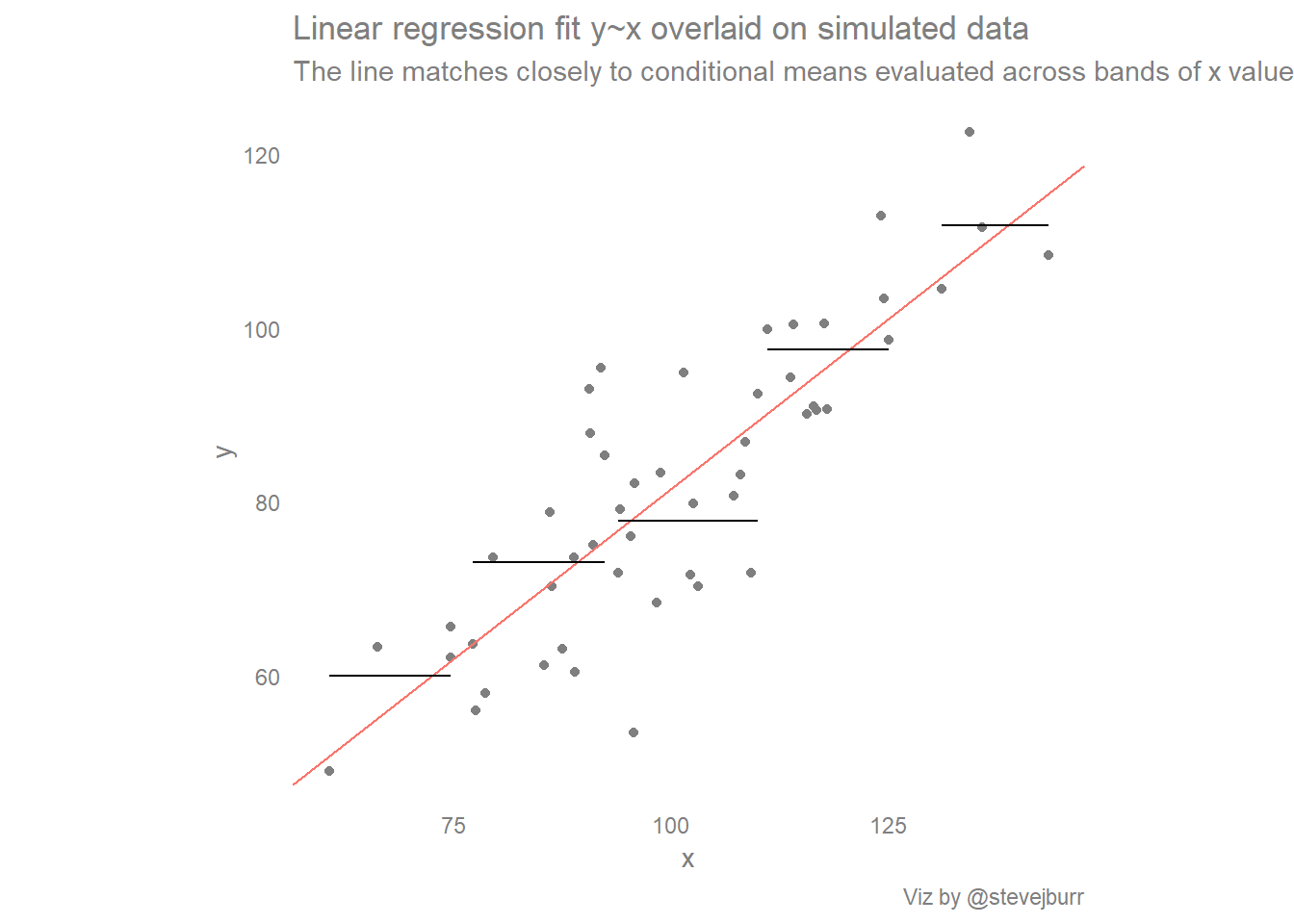 The starting point for this post was a diagram stating that the “best fit” line people will draw through a cloud of points isn’t the same line that is produced by a linear regression analysis. So what exactly is this “natural” line?

The linear regression line tries to put a line through the points so that vertical error (predicted y vs actual y) is minimised, whereas the natural line is accounting for both differences in the x and y directions and trying to position the line to minimise both these quantities. This is finding the line with the shortest diagonal distance to each data point, as opposed to the vertical distance in the linear regression case.

The shortest distance from a point to a line is the perpendicular distance, that is to say the line which goes through the point and forms a right angle with the other line. These two lines are orthogonal, and hence finding this “natural” line is “Orthogonal Regression”, or “Deming Regression”.

There are packages for running Deming Regression in R, but we don’t need those when looking at this two dimensional example. This is because the “natural” line is also the first principal component of the data.

I’m not going to go into detail here on what principal components analysis is, but the essential goal is to transform a dataset so that instead of describing data points with a set of (x,y) coordinates we instead use a different set of coordinates where the two axis are aligned to the variation in the data.

The components are ordered so that the first component explains most of the variance in the data, and subsequent components are orthogonal to those that have come before (in the same way that the y axis is at right angles to the x axis). This sounds a little abstract, but in the example of this 2D scatter plot, the process amounts to visually rotating the cloud of points so that the long/stretched out part of the cloud becomes the new x axis (the first principal component) and the remaining variation becomes the new y axis: 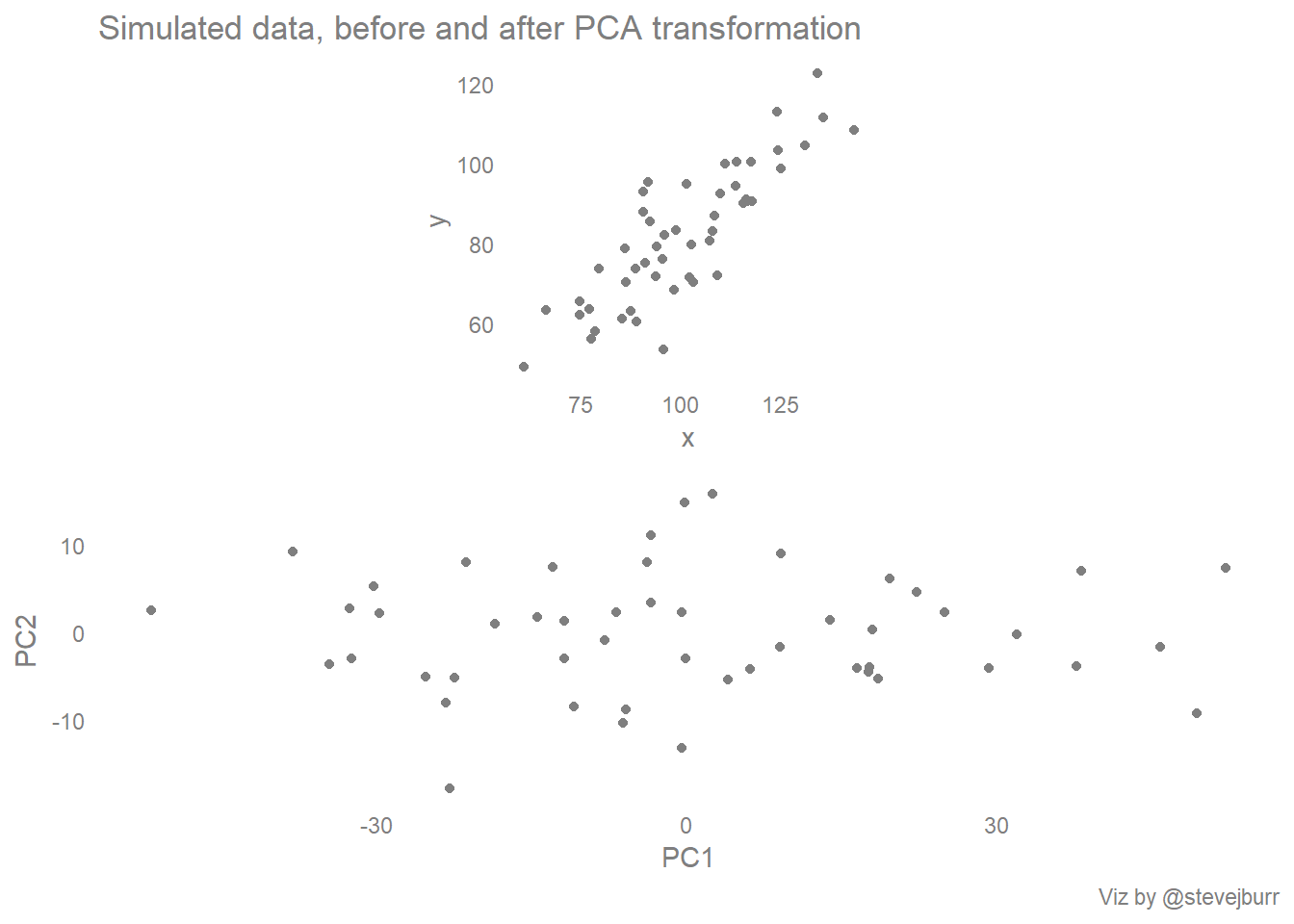 The information we need to use in order to draw a best fit line is held within the “rotations” part of the object returned by the prcomp function:

Once we have these values, we can plot the line on the scatter plot in the same way as before: 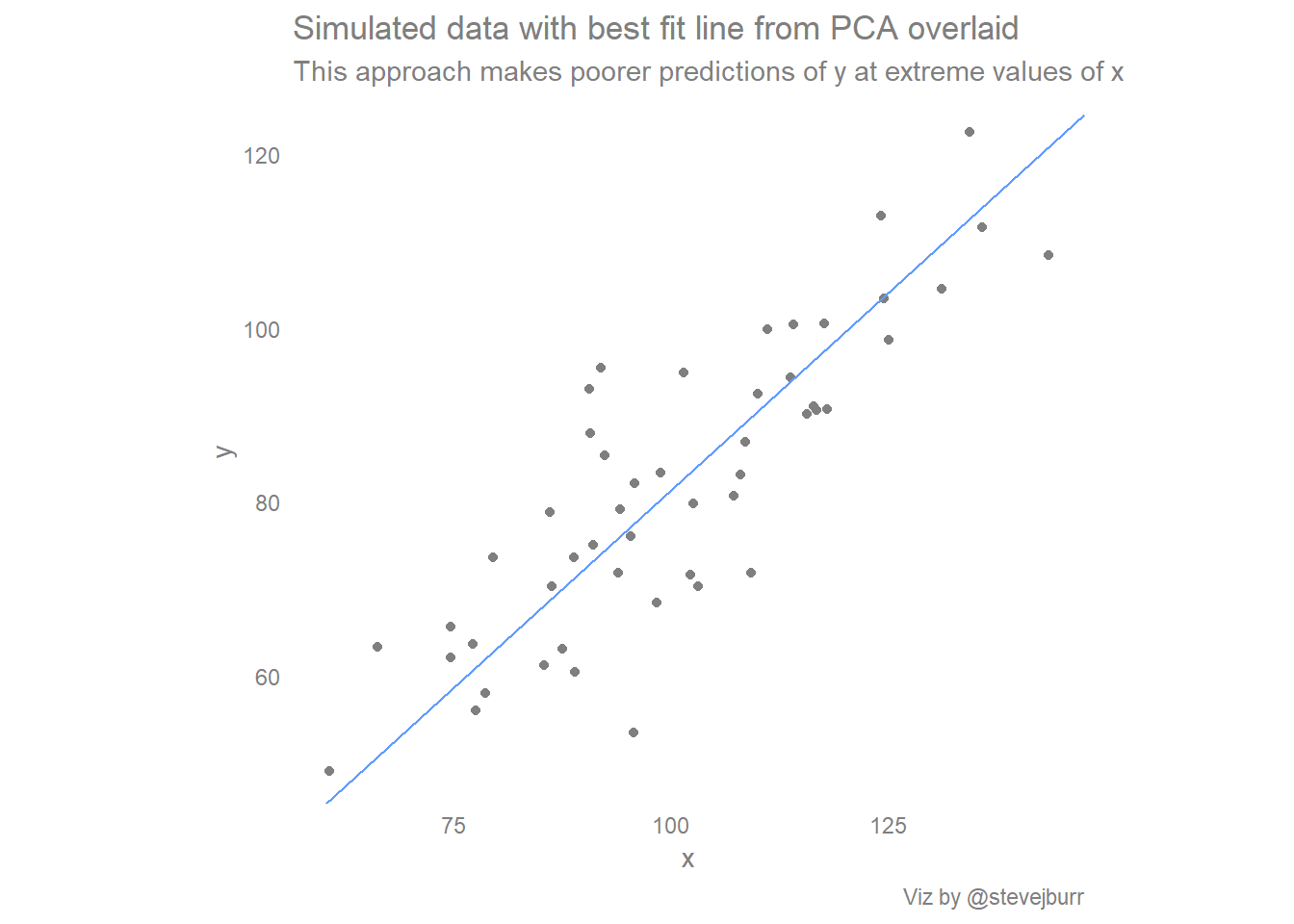 If you draw the natural line in your head, then you can think of the standard regression line as being produced by pulling the ends of the natural line towards the center of the data to moderate the predictions. I think this is a nice, intuitive way of thinking about these different approaches which captures a lot of the reasons behind the differences.

The final of three lines we could easily include is the regression line of x being predicted by y. The direction of this line is defined in much the same way as the first line, but it makes the reverse assumptions about the relationship between the two variables. Traditionally scatter plots are designed with the assumption that whatever is on the y axis is best viewed as being predicted (or sometimes “caused”) by whatever is on the x axis, so this often isn’t the most useful line to add. However, I like the symmetry it adds to the visualisation, and it provides context around how the line would look if we are wrong about the direction we are thinking about the relationship.

Without dwelling further, the line can be created and plotted as follows: 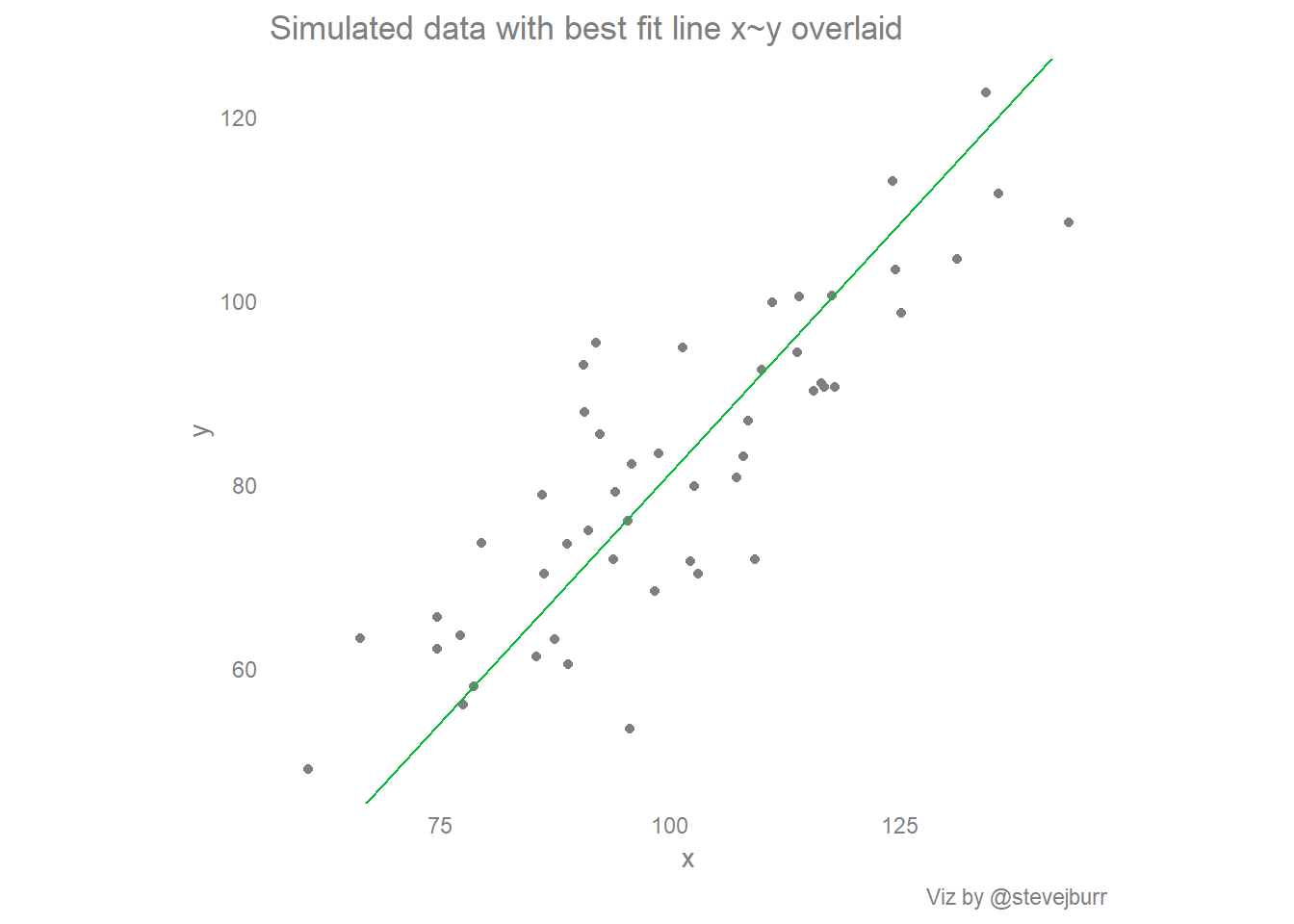 Putting it all together:

Now we have a way of calculating the three different lines, it would be nice to be able to view them on a single visualisation. We could just add the three calls to “geom_abline” used for the individual plots to a single plot, but that is not the most elegant solution.

Additionally, I’d like to visually show the quantity which each approach to drawing a line minimises, so I decided to do some data manipulation to transform the data to make this easier.

Most of this is fairly simple data manipulation code - the main exception is that I personally didn’t find the formula for working out the closest distance from a point to a line at all obvious so had to look it up.

Let’s run the analysis and take a look at the top of the dataset:

Then we can make the plots: 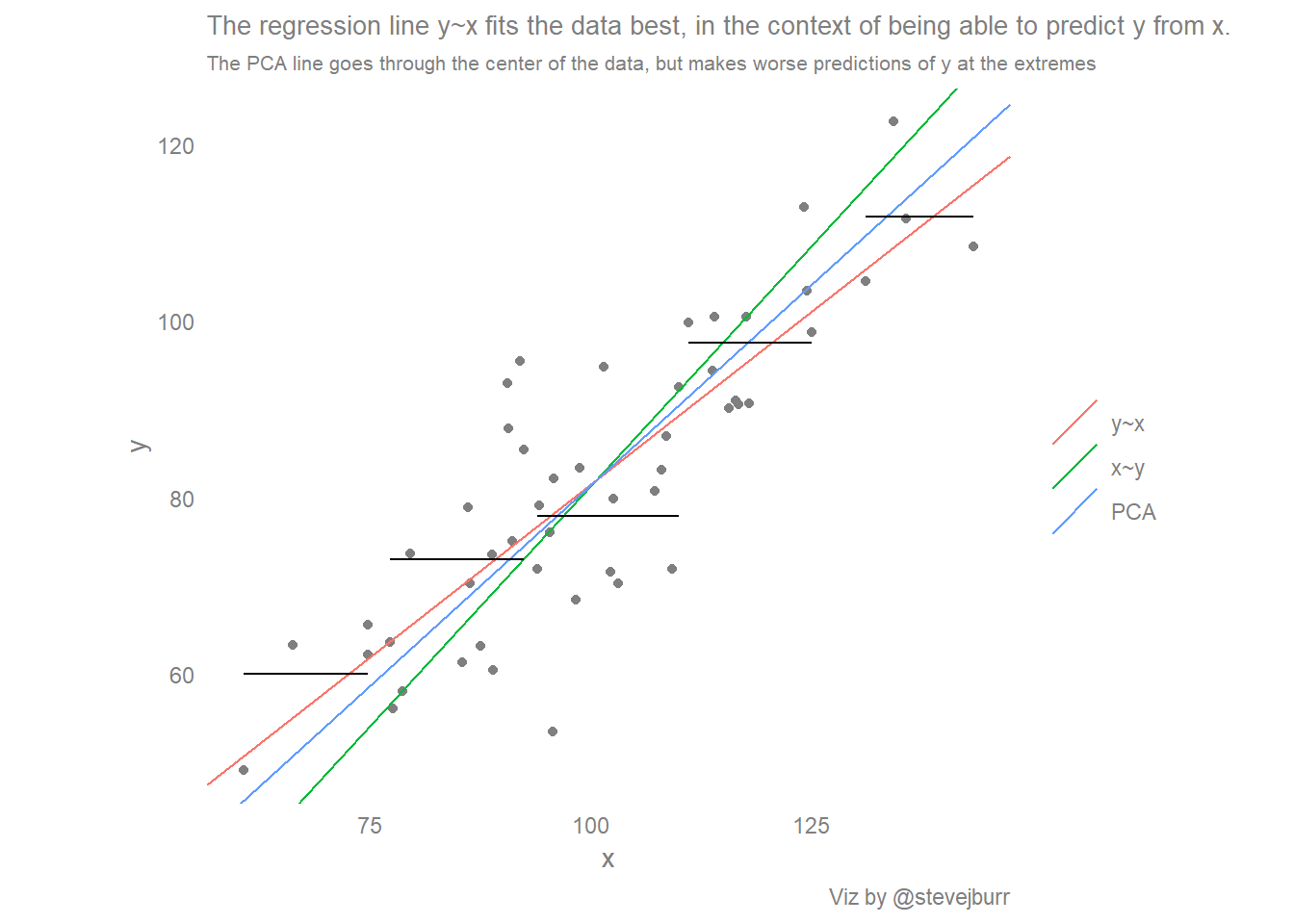 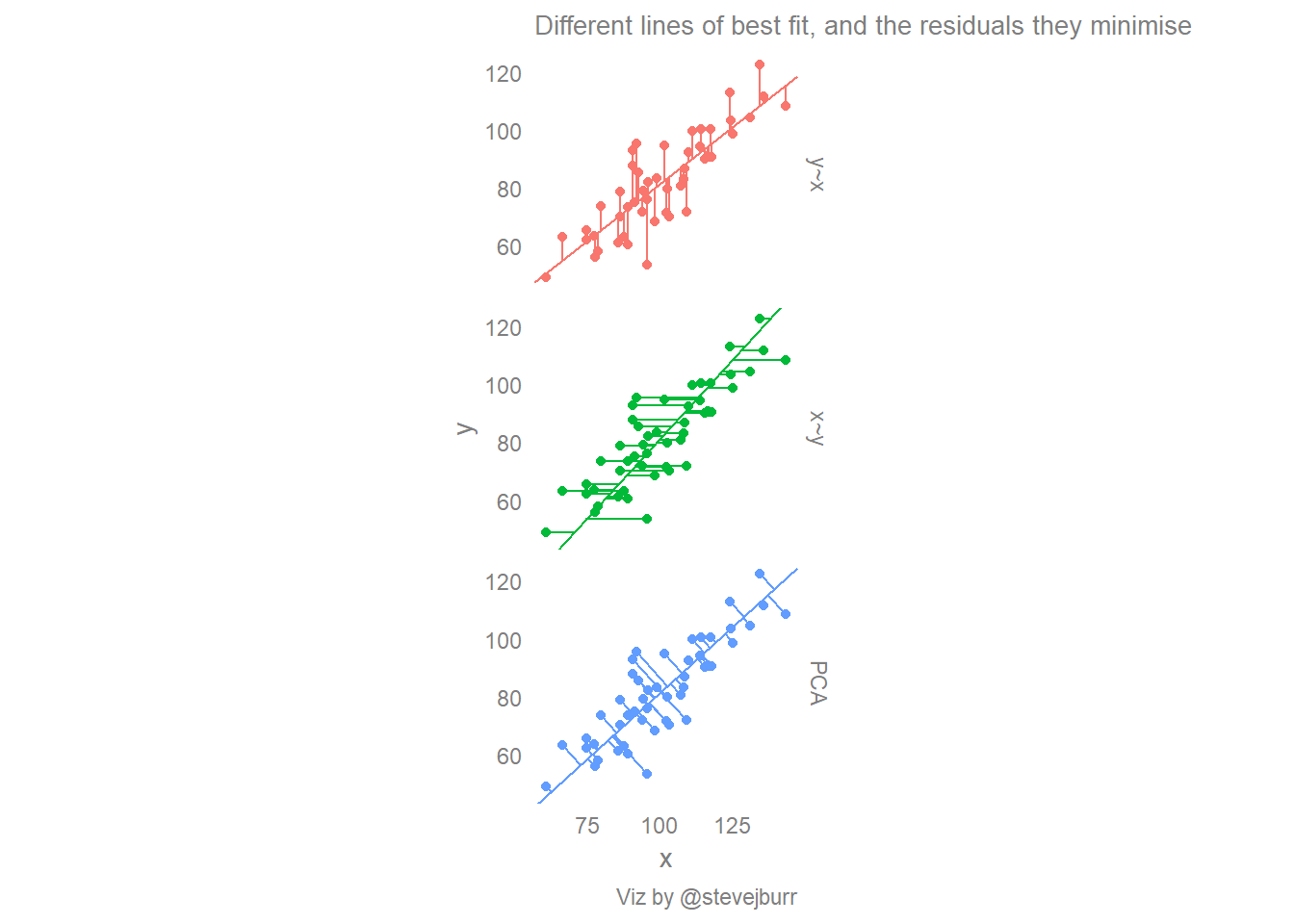 There are multiple ways of drawing a line of best fit through a simple (x,y) scatter plot, and each make different assumptions about the underlying relationships between the two variables.

If the goal is prediction of y from x, when it likely that the relationship between the two variables does run in that direction, then the least squares / linear regression fit will give the most reliable estimates of y throughout the full range of x.

It has been suggested that the most natural line that people draw by eye is in fact the orthogonal regression (PCA) line. If that is indeed the case then this will lead to over estimates of the correlation between two variables and a tendency for estimates done “by eye” to be too low for small values and too high for larger values (when there is a positive correlation between the two variables).

This is worth keeping in mind when doing exploratory analysis by hand, and explictly drawing on standard linear regression lines may help to avoid mistakes when interpreting these relationships.